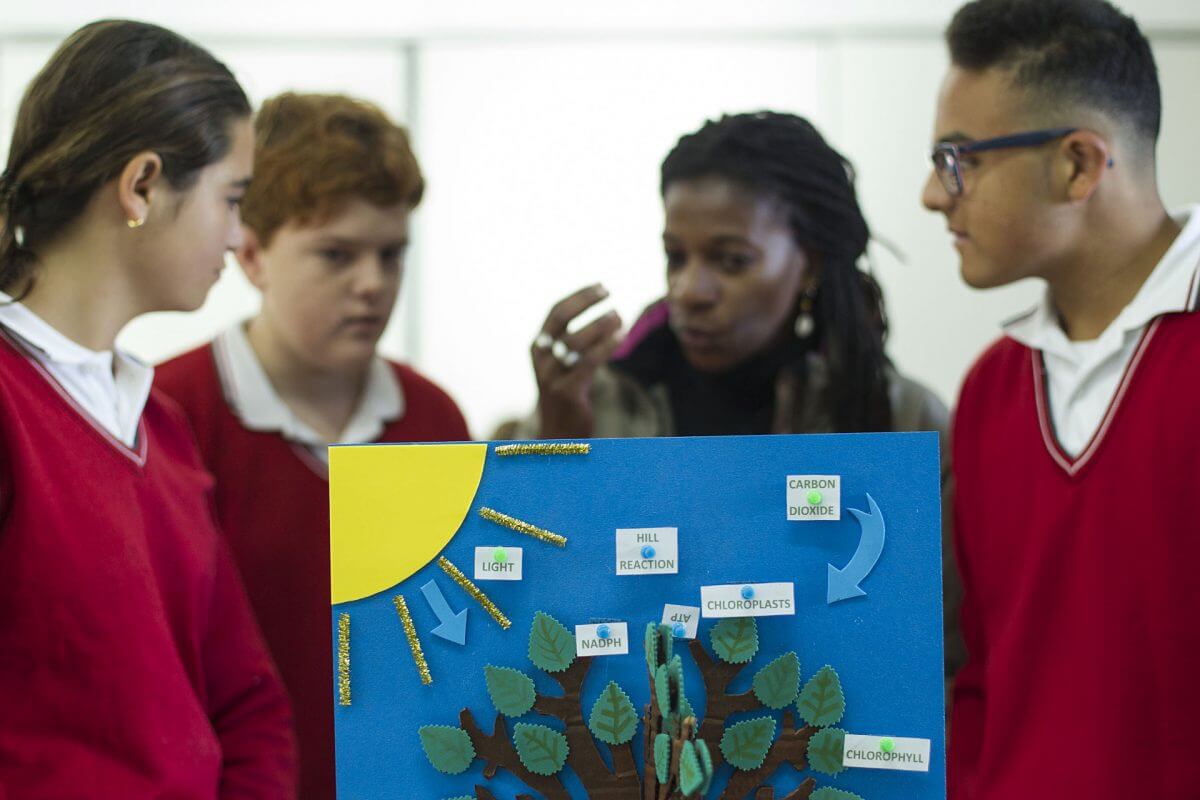 ONE SPACE FOR LANGUAGE LEARNING

In the current society, speaking other languages is a necessary skill to move on and develop ourselves. Mastering the main languages involved in trade and economic transactions is fundamental. Aware of this reality, the school El Pinar, which has already implemented a solvent Language School focused on official certificates of the University of Cambridge, adds German to its offer with a large range of content to achieve the certificates of the Goethe Institute .

Concerning English, our objective is clear: preparing children for the Cambridges certificates. Being English the second language of the world and after the changes in the European education system (Bologna Plan) which requieres that all the university students must have achieved at least level B1, our Language School is aimed at preparing the Cambridge exams, for it is the most recognized and acknowledged in Spain and other countries of the European Union.

Due to the high demand, in 2010 the School of Languages opened the admission to any person interested in learning English. Since then, we have groups of adults, with different levels, aimed at obtaining an official certificate of the University of Cambridge.

Every year more than 3 million people take the Cambridge exams. Cambridge ESOL examinations (English for Speakers of Other Languages) are world renowned and are recognised by schools, colleges, universities, ministries , international agencies and corporations as tangible evidence of the level of knowledge and as a guarantee of language skills in English.

The Bologna Process involves the adaptation and unification of educational standards in all European centers and the creation of the EHEA (EUROPEAN HIGHER EDUCATION AREA ).

WHAT IS THE (EHEA) ? The Bologna Declaration launched the creation of a European Higher

Education Area to encourage mobility and employment opportunities for citizens of the European Union. With the Bologna process, European universities are required to implement an international model and to require a level B1 in a second language as a condition for obtaining the Degree .

The goal is that the students speak current English, as it is the second most spoken language in the world and has an undeniable importance in the Business World .

What is the Common European Framework of Reference for Languages ​​( CEFR ) ?

The Common European Framework of Reference for Languages ​​(CEF ) plays a fundamental role of the United Nations in language and education policies not only in Europe but worldwide. It is becoming more and more important for Language’ skills evaluators and Examination organizations, since they also work on the definition of the levels of language proficiency and in the interpretation of the different degrees in languages.

The CEFR describes language ability on a scale of levels from A1 (beginners) to C2 (those who master a language). This is very useful for all those involved in teaching or evaluating language examinations (students, teachers , teacher’s trainers, etc.) as it allows them to easily identify the appropriate level to different degrees It also compares qualifications, so employers and educational institutions comparing qualifications.

They are able to understand and to use common expressions and basic phrases with immediate purposes. They can introduce themselvesyourself and other people, ask and answer questions about personal details, their belongings and people they know. They can interact in a simple way provided the other person talks slowly and clearly and is willing to help.

They are able to understand sentences and regular expressions related to areas that concern them (basic information about themselves and their family, shopping, local geography, employment, etc.). Can communicate when carrying out simple daily tasks that just require a simple and direct exchange of information that their familiar with. Can describe with simple terms past experiences and events related to their environment.

They are able to understand the main points of clear texts on matters that are familiar to them: situations at work, school or leisure. They can deal with most of the situations that may arise while traveling. They are able to produce simple coherent texts on topics which are familiar to them or they are interested in. They can describe experiences, events, dreams and ambitions, as well as briefly justify their opinions and explain their plans.

They are able to understand the main ideas of complex texts about concrete and abstract topics, even technical texts if it is within their field of specialization. They can fluently speak with native speakers, and the communication will be perform without any efforts by any of the speakers. They can write clear, detailed texts on general topics and explain a point of view giving the advantages and disadvantages.

They are able to understand a wide range of long texts of a certain level of understanding a recognize in them implicit senses. Can express fluently and spontaneously, being able to find the right expression without big efforts. Can efficiently with social, academic and professional purposes. Can create clear, structured and detailed texts about complex subjects, proving their ability to organize and relate ideas.

They are able to understand with no efforts everything they hear or read. The can rebuild information and arguments from different sources, in spoken or written language, and they can summarize the content in a coherent way. They can express themselves spontaneously, very fluently and precisely, even in complex situations.

We must consider the raising importance of Germany in the European, this country holds great job opportunities for professionals with a great curriculum. But not speaking German could turn into a key problem. Speaking German is undoubtedly the most useful tool to get integrated into the German culture. Often, the professional possibilities will be influenced by the level of German acquired. This is why El Pinar added German to the ir Language School, and willl prepare their students to achieve the certificates delivered the Goethe Institute.

The aim of this level is to understand common expressions and basic sentences in order to solve issues and specific needs. Students will be able to introduce themselves, and to ask and answer questions about where they live, the people they know and the things around them . We may communicate with other speakers provided they speak slowly and clearly. The level A1 is essential to get initiated in the language skills before progressing and moving forward higher levels.

The level A2 will be useful when traveling or improve your professional situation. Students will be able to communicate on a daily basic and to read short easy texts.situations with ease, and read short, simple texts . The goal is to improve their ability to communicate in German. During the clases we will work on the structures that will provide the confidence needed to communicate in regular situations such as ordering in a coffee-shop or restaurant, talking about the weather, phoning, sending e-mails and having talks at certain level.

This popup will close in:

The center will be closed between August 10 and 16 for maintenance.

We will attend you again on the 17th at the usual time. Happy Holidays!